OUR STORY – A Call To Ecological Consciousness 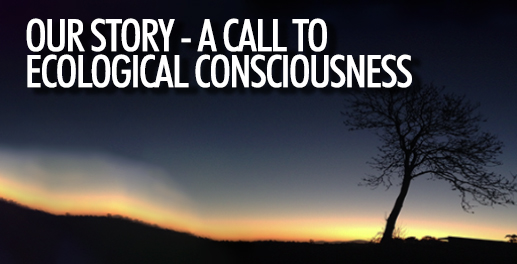 A project exploring the central stories, narratives and metaphors that underpin the ecological crisis – and how we might begin to transform them – to reclaim our natural human inheritance, ‘Our Story’ of ecological consciousness.

Overview
The unfolding ecological crisis, according to professor of science Thomas Lovejoy, is ‘the greatest challenge of our species’. (1)

For author and Jungian analyst Andrew Fellows this crisis has resulted from our ‘dysfunctional relationship’ with ‘both inner and outer Nature’. (2)

And for cultural historian Thomas Berry this dysfunctional relationship comes from a crisis of narrative:

We are in trouble now because … we are in between stories.
The Old Story is (no longer functioning) properly and we have (yet to fully articulate) the New Story. (3)

The Old Story – embodied by the Western anthropocentric worldview – has come to dominate international affairs over the past two hundred years with disastrous planet-wide consequences.

As we witness ‘the ominous consequences of what we have been doing to the earth and to ourselves’ it is clear that The Old Story/anthropocentric worldview narrative – based on a philosophy of separation built on linear thinking – has become perilously dysfunctional and degenerative. (4)

For many the development of a new regenerative paradigm can only be facilitated by the emergence of a New Story/ecological worldview – based on a philosophy of interdependence built on interdisciplinary systems thinking and embodied in indigenous peoples worldviews the world over. (5)

This evolving New Story is embodied by new – and very ancient – movements right across the spectrum of human experience.  These movements are challenging the core metaphors of the Old Story by radically re-imagining – what Buddhist scholar and ecophilosopher Joanna Macy describes as – our whole ‘relationship to our world, to ourselves, and to each other’. (6)

This project will facilitate a direct engagement with the central narratives and metaphors of the Old and New Stories.

And it has the potential to act as a catalyst for inspiring new narrative possibilities for engaging with the urgent and compelling themes of the pivotal times we live in.

The working sub-title of this project is inspired by a 1977 address to the NGO’s of the United Nations in Geneva by a delegation from the Iroquois Confederacy.

This historic address was described as a ‘Call to Basic Consciousness’ – of the ‘Sacred Web of Life in the Universe’ – that has ‘ancient roots and ultra-modern, even futuristic, manifestations’. (7)

This project is evolving from over a decade of inter-disciplinary research.

It is an organic articulation of the essential themes underpinning all of my own creative work; exploring the connections between culture, spirituality and ecology that are so central to the major challenges facing us in the pivotal times we live in.

Its articulation was facilitated by the the “anthropause” in human affairs that came with the Covid pandemic in 2020.

Its germination was nurtured through an Arts Council Bursary award in 2021.

Its manifestation is being cultivated through a Creative Practice PhD currently being undertaken through LSAD (Limerick School of Art & Design) & TUS (Technical University of the Shannon).